Looking for the best tower defense games on PC? For a time, the humble tower defense game was one of the most popular genres out there. They may appear to be simple strategy games for more casual players, but fans would call them accessible tactical titles that require sharp reflexes, a sharper mind, and quick improvisation.

Their accessibility comes from how deceptively straightforward they are – at least to begin with. A horde of enemies comes from specific directions across a small arena and the player has to improvise a set of appropriate defenses, using scant resources, to deal with them. Enemies become tougher and more numerous as the game progresses, but the player gets access to better equipment to deal with them too.

They’re also highly addictive, which is why there remains a steady influx of tower defense titles – they even pop up in other genres too, such as the entertaining den defense minigame in Assassin’s Creed Revelations. While the genre often veers towards smartphone and tablet gaming, there are still many fantastic tower defense games on PC right now. Here’s the best of the best.

The best tower defense games on PC are:

For many, Plants vs Zombies is the ultimate game, period. Even by tower defense standards it’s simple – there’s no long path to defend, the zombies come from the right, and the player defends the left. If a zombie makes it all the way left in a lane, there’s one do-over available in the form of a lawnmower.

Nevertheless, Plants vs Zombies is a perfect cycle of addiction. Every level offers something new to keep you hooked – more challenging zombies are gradually introduced, numerous minigames break up the gameplay, and new plants become available to play with. Combined with the appealing world design and aggressively fun sound design, it’s easy to see how Plants vs Zombies became a phenomenon – a shame that subsequent Plants vs Zombies games have either been mobile-only or online shooters. 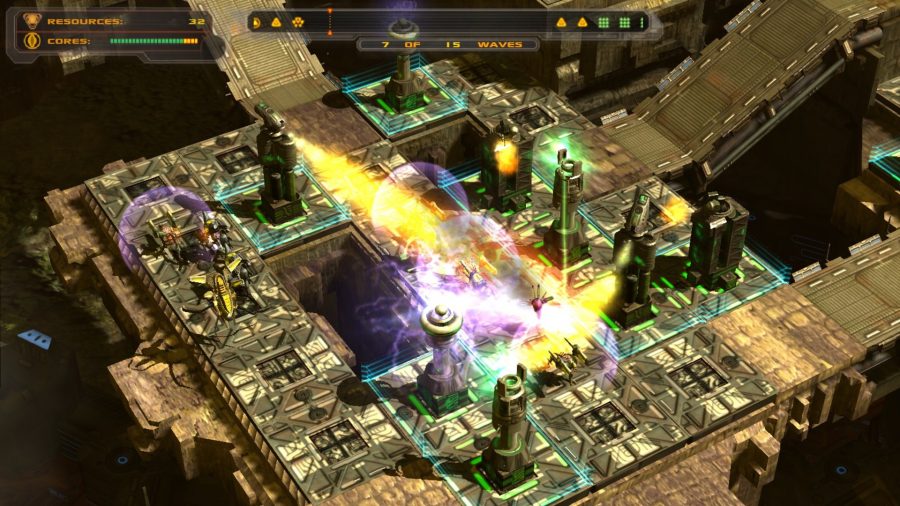 The original Defense Grid: The Awakening is straightforward perfection – and unlike many games on this list, you’re actually using towers as a defense. Stop aliens from stealing power cores from a charmingly British AI companion, and kill them if they try to escape. Defeating aliens nets the resources to buy or upgrade the various types of towers, and there are the usual death mazes the player can put together, but otherwise, that’s it.

Defense Grid is a pure, addictive tower defense delight – and if that’s not enough, there are DLC tie-ins with Borderlands and Portal, too. Defense Grid 2, however, is a little overcomplicated – we’ll stick to the original. 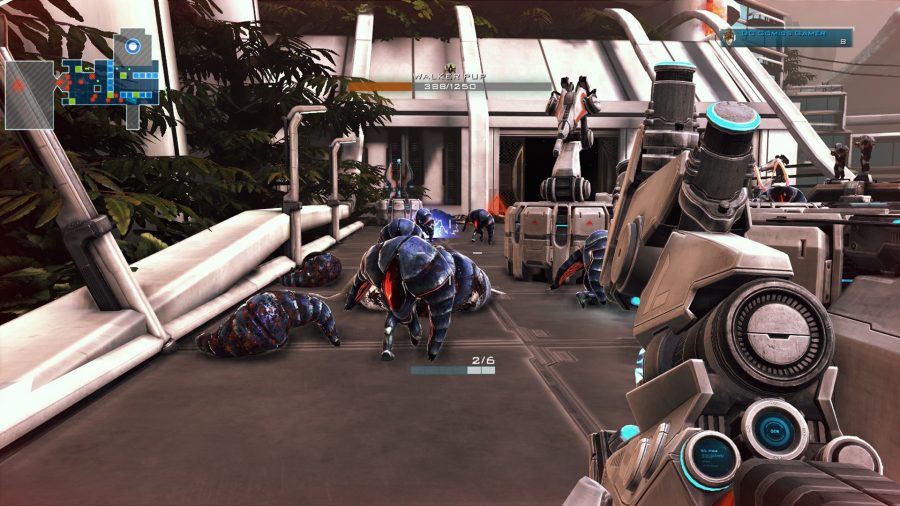 From the studio behind Satisfactory and, er, Goat Simulator, Sanctum 2 is unique in that it’s also an FPS game. If you just play the first few seconds, you could be forgiven for thinking you’ve bought a Borderlands-style co-op shooter – until you hit the arena and have to put up walls, turrets, tesla coils, and other defenses to stop the alien hordes from taking out your power cores.

All you really need to know is that you can create death mazes in up to four-player co-op. Sanctum 2 is one to throw at anyone who says that tower defense games aren’t exciting. 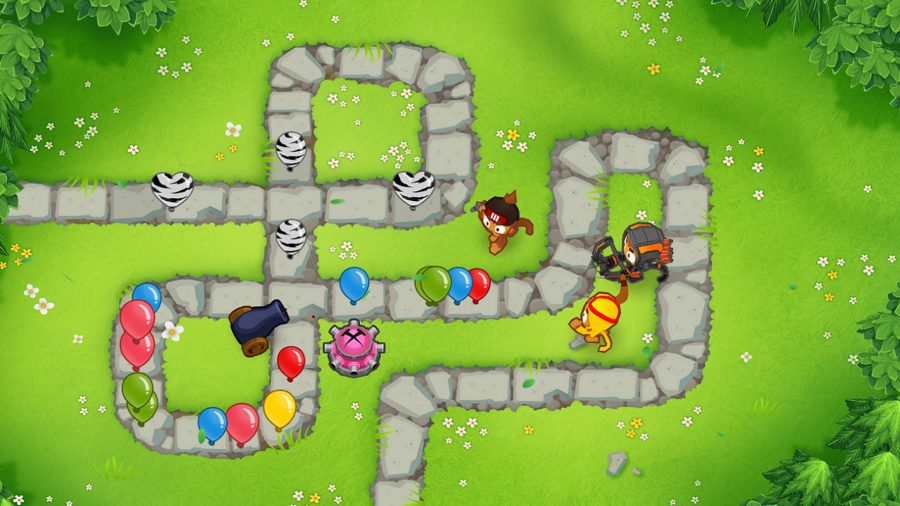 Anyone who’s dismissed the Bloons series for appearing childish, basic, or highly microtransaction-y should think again, since Bloons TD 6 is nothing less than the highest-rated tower defense game on Steam. The games are deliberately cartoony by nature – you place monkeys with special powers around a map to protect it from malevolent balloons.

The gameplay focuses on characters rather than structures, who can be upgraded, levelled-up, and given better equipment. There’s an almost XCOM-level of squad management here, which elevates Bloons TD 6 to a whole new plane of addiction. 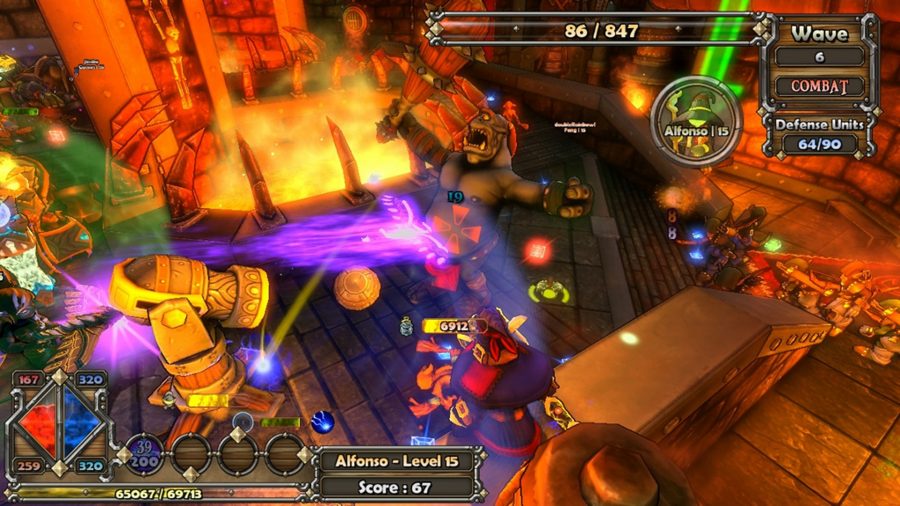 Dungeon Defenders is part-MOBA, part-action RPG, all tower defense. You must defend the fantasy land of Etheria against the hordes of orcs, goblins, etc – your typical RPG fare — by creating a character from several classes, equipping the right gear, upgrading abilities, and heading out to battle.
From here, players are thrown into a small arena where enemies attack in waves from specific directions, if that sounds familiar. Each class has its own defenses to place, which can be repaired, sold, or upgraded, but they can’t do all the work —the player has to get stuck in too. 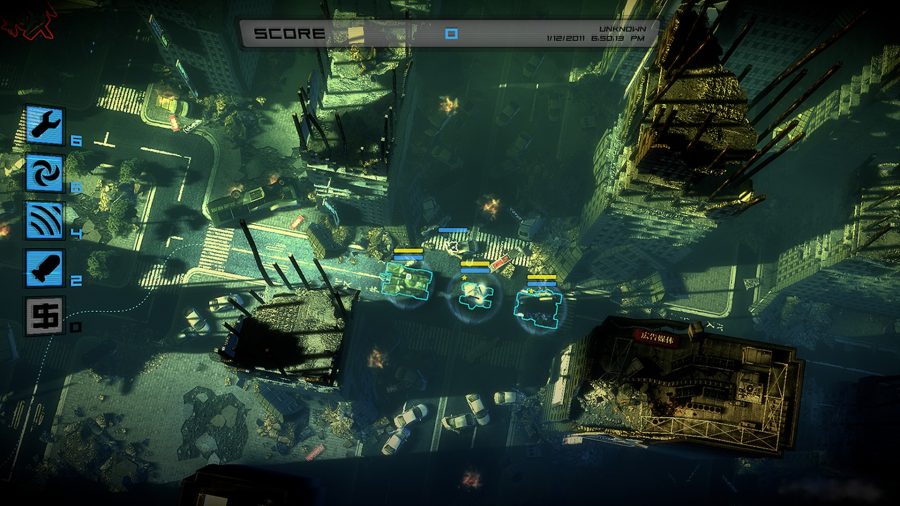 Anomaly: Warzone Earth is a complete reversal of the tower defense genre – the player instead controls the units they’re trying to sneak past the defenses in order to attack. It’s tower offence.

After plotting a course through an alien-controlled hellscape, players have to keep their limited units healthy, upgrading them wherever possible, in order to make it to the objective while attacking the various tower defenses along the way. It’s not the longest game on this list, but it’s an innovative and fun spin on the genre. 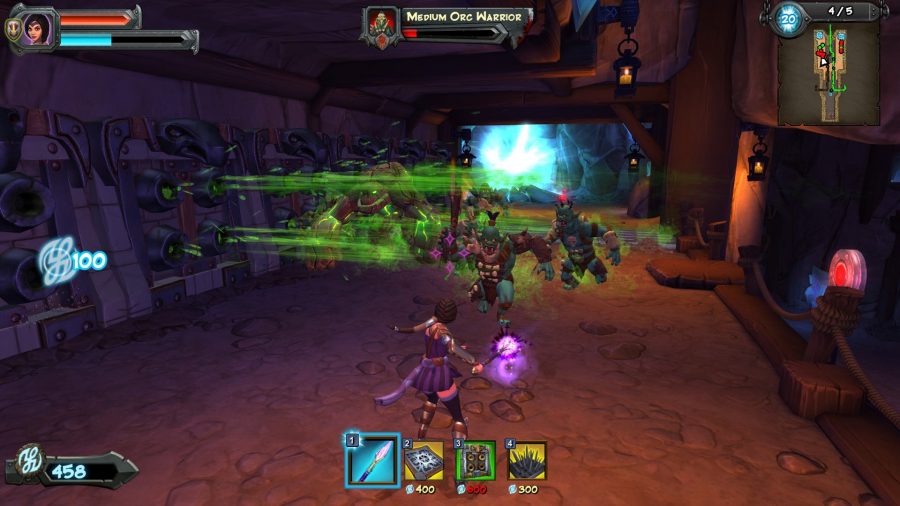 The Orcs Must Die! Series mixes third-person shooter, melee, and magic combat with fantasy-based tower defense, requiring players to mix strategy with skill – you can’t rely on just your weapons or the Dungeon Keeper-style traps to defeat the Orc hordes.

The horde gets wilder as you upgrade both your traps and weapons, and both the Magicka-style comedic fantasy and co-op adds a lot to make Orcs Must Die! 2 an addictive experience. The third game in the series is currently a Stadia exclusive, but we’re holding out hope for a general release. 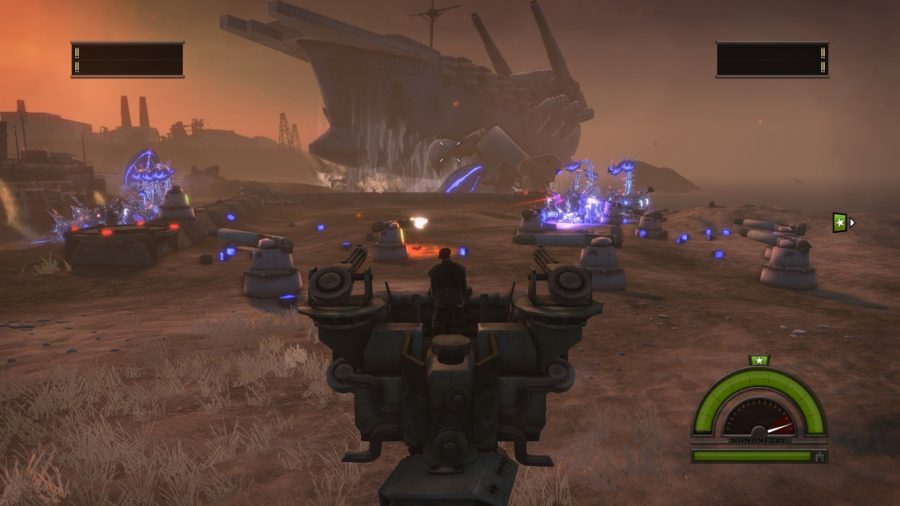 From Psychonauts developer Double Fine comes this underrated third-person mech combat/tower defense mash-up. In the aftermath of WW1, a crazed scientist tries to take over the world with his army of killer televisions, but luckily the chaps of the mobile trench division are here to save the day.

The player gets a fully-armed mech, which is fun, but they’ll also need to set up defenses to counter the Tube onslaught. The unique gameplay, co-op, and Double Fine’s signature snappy wit make Iron Brigade well worth a visit.

Bardbarian features a barbarian named Brad who hung up his axe to play guitar instead. By playing sick tunes Brad can call several fighters to follow him, who attack enemies when they get close. It’s a tower defense game where the defenses accompany the player around the battlefield.

The player doesn’t attack at all – although they can be killed – you simply lead troops, boost them with guitar riffs, and collect gold for upgrades, which include new unit types, more effective boosts, and a town drunk who vomits in the enemy’s path. The usual stuff. 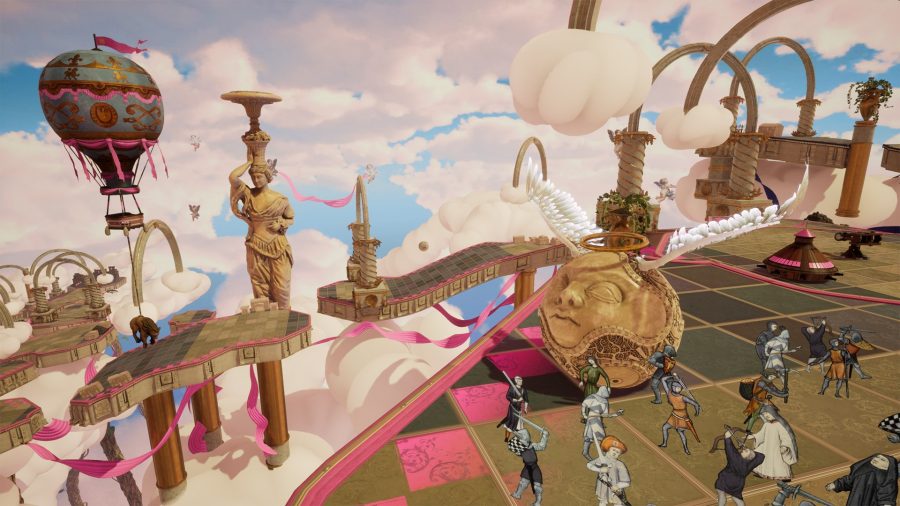 ROCK OF AGES 2: BIGGER AND BOULDER

The Rock Of Ages series is an intriguing mix of tower defense, Super Monkey Ball, and the animated bits of Monty Python. Each level features a downhill course with a base at the end that the player has to protect with various wacky defenses. At the same time, the player’s opponent – human or AI – is doing the same thing.

Related: Here are the best indie games on PC in 2021

When either is ready, they can control a rolling boulder and attempt to smash through those defenses and crash into the enemy base. Rock Of Ages 2 is probably the best in the series, as the more recent third game leaned a little too hard into the difficulty and lost much of the fun.

Now you’re set up with a selection of the best tower defense games, ready for the oncoming hordes of aliens/zombies/terrifying balloons. As you watch them fall before you, check out our guide to the best strategy games on PC.